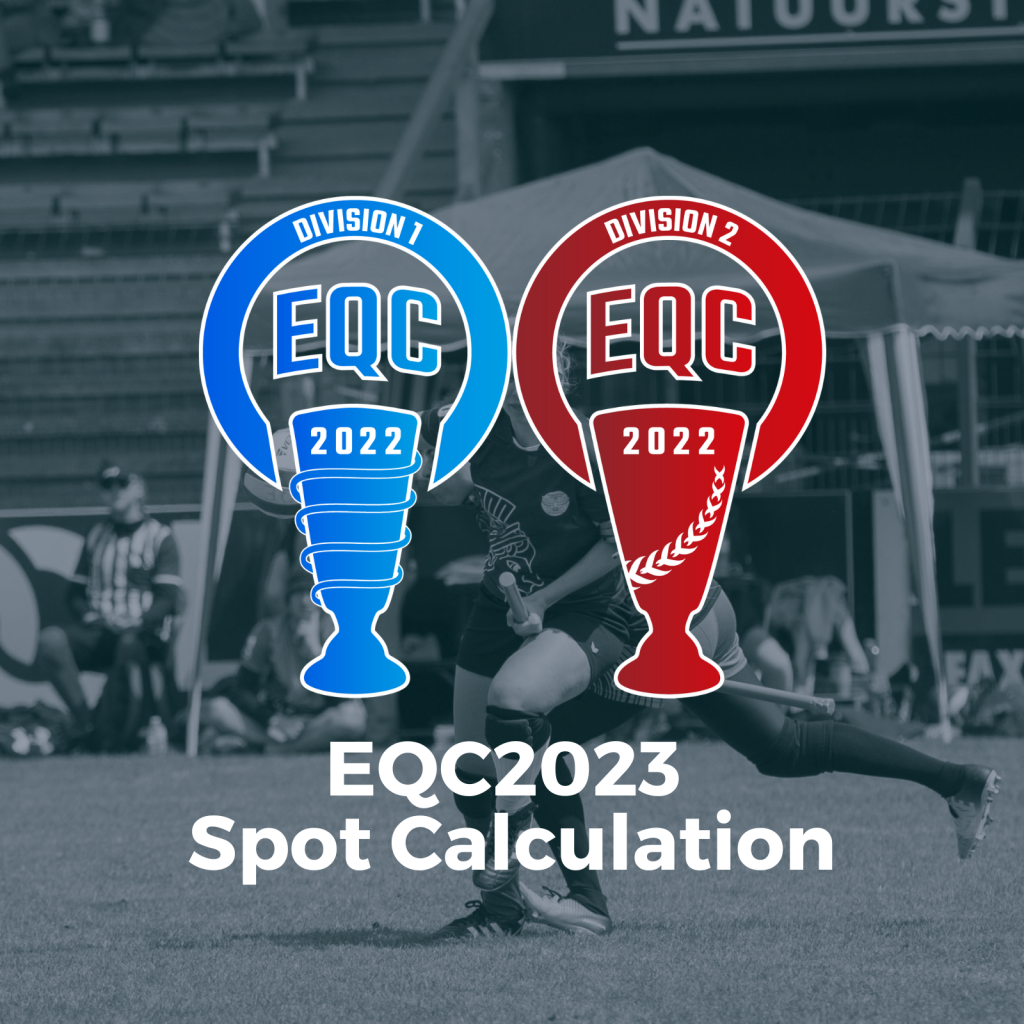 We have finished the work on the spot allocation for EQC2023!

Multiple items had to be discussed before we could finalize the spot calculation.

In order to correctly calculate the spot allocations for EQC2023, we need these numbers from all NGBs. All Member NGBs were asked to collect and send the following information:

Quick side note/info on the “adult”/”youth” terminology:

“adult” in this case refers to the affiliation of the players to the teams and not the actual age of the players.
e.g. if a club has 1 A-team, 1 B-team and 1 youth-team, this club counts as having 2 “adult” teams and 1 “youth” team. The players in the A- and B-teams are the “adult” players.

The following numbers were reached:

The size of EQC2023 Division 2 is one of the essential decisions that determines the spot allocation. In the past we have seen a 16-team Division 2 in 2019 (Warsaw, Poland) and just a few months ago we (finally) held a 24 team Division 2 (Brescia, Italy).

The Board is afraid that if we increase the size to 32 teams the following will happen: several NGBs will inevitably see an increase in their allocated number of spots. However, judging from the reported number of teams we do not think that some of these NGBs will be able to field the allocated amount of teams for EQC or only with very reduced rosters. This would put these NGBs in the position that they need to forfeit some of their spots. We will then end up in a situation where we will see several forfeits for Division 2 because the next-in-line NGBs will face a similar issue and have to decline these re-allocated spots again.
With this in mind, the Board recommends that the size of EQC 2023 Division 2 stays at 24 teams.

9 Members voted, with 6 of them accepting the Board’s recommendation.

With EQC2022 Division 1, we have reached a point where one NGB held 8 spots. However, this number is the limit of spots per NGB that still allows for groups to have a maximum of 1 team from each NGB – in the current gameplay format. Should any NGB have more than 8 spots in any of the two divisions, there would be at least 1 group with 2 teams from the same NGB. This clashes with the idea of guaranteeing international games at EQC.

To counter this situation, the Board proposed of an additional spot cap of maximum 8 teams from the same NGB in each Division of EQC.

With no real objections, this has been accepted by the member NGBs.

The Spot Maximum per NGB per Division will be 8.

The matter of the maximum team cap for EQC2023 over both division also needs to be addressed.
With past decisions and the algorithm in place, this is very straightforward.

Should the size of Division 2 be increased to 32 teams, the algorithm already has a maximum 12-teams/NGB cap included, which would be used in this case.

Should the size of Division 2 remain at 24 teams, there is a precedent that determines the spot cap per NGB for this scenario as well: there has been a vote on the spot cap for EQC2020 (and because of the multiple postponements also for EQC 2022) of a 10-teams/NGB, which would be used in the case of a 24-team Division 2.

The Board has been in contact with the IQA Membership Department and based on their information, the following decisions have been taken:

However, we do not want to exclude any NGB from the option of attending EQC.

The board proposes to have 3 emerging area spots at EQC2023, to give (re)building regions the possibility to attend EQC if they wish to do so. Should we get no applications at all or only a limited amount of applications, the remaining EA spots will be re-distributed according to the algorithm.

With 7 out of 9 voting Member NGBS accepting the recommendation, there will be 3 Emerging Area Spots.

This year was the first time that we encountered a forfeit of spots at EQC by an NGB. Even though there are very clear steps in the algorithm on how to proceed in this case, there have been several opinions (also from the community at large) that this procedure would be unfair. The consequence of this forfeit would inevitably be a reduction in EQC2023 spots for Turkey and an increase in spots for NGBs that profited from this forfeit.

Especially considering the nature of the forfeit, the Board agreed to some extent to the opinion of this being unfair, but any deviation from the procedure outlined in the algorithm would needed thorough discussion.

The Board tried to keep the changes to the algorithm as small as possible in order for them to be minimally invasive and to cause the least possible changes on the longer-term effects. But before we get to the explanation of the decision, we want to stress, that all changes this year will be solely used for this spot calculation and should not be used as a precedence case for future years!

NGBs receiving additional spots in 2022 due to Turkey forfeiting

The first thing we discussed and decided upon was on how to deal with teams in Division 1 that received their (additional) spots as a result of the forfeit by Turkey and resulting re-allocation of spots.

Because of the performance-point system of Division 1 spots, this re-allocation can have massive impacts in future years.

We used the lowest ranking team based on the assumption that the next-in-line team would get the additional spot and they would perform lower than the other teams from that NGB and that we also have no real method of tracing back which team got the additional spot in that NGB.

The other thing we discussed is on how to deal with the fact that Turkey forfeited 4 of their initial 5 spots in Division 1. A forfeit of that magnitude has huge consequences for the NGB in the long-run. Also, the magnitude and nature of the forfeit gave us reason to make changes to the system such that Turkey does not suffer for future EQCs because of economic reasons that are completely out of their control.

We calculated the spots Turkey would get and it resulted in 3 Spots total over both Divisions for EQC 2023: 2 spots in Division 1 and 1 spot in Division 2.

We decided to give Turkey all these 3 spots in Division 1.

We believe that this is the best solution, as this would both give Turkey the chance of proving that they in fact deserve these Division 1 spots, as well as not have too much of a strength/level-gradient in the Division 2 team-lineup.

We want to be transparent in our proceedings and explain our reasoning here on why this is a Board’s decision and has not come to Member vote.

An executive decision by the Board is the best way to move forward for this year, especially considering that the situation is centered around one single NGB.

Putting this to a vote for all Member NGBs would single out that one NGB even more. The Board wanted to avoid this as much as possible and to not put that one NGB under more pressure.

This is also the reason why we are making sure that this right now is a specific solution for just this year and not a general change in the procedure of the algorithm.

With all topics explained, we can finally summarize the spots.

You can find the full calculations and summary in this linked spreadsheet.